The iconic desert sunshine gifted the day with 80 degrees of calming warmth complimented by a cool breeze on our skin. It was the perfect day in Mesa, Arizona. Too bad we would be spending most of it indoors. My friend Willy and I had been planning this day for the past week. We carpooled and hunted our way to the entrance of the Mesa Convention Center ready to have a fun Saturday at Zapcon 2015.

A man appearing to be of his forties walked in just behind us. He looked a bit lost but little did he know he would find his way. Not only to the steps ahead of him but also the path to his place in time. He had heard of Zapcon, a retro and classic arcade gaming convention, by word of mouth or by a flier perhaps, I will never know. He asked the woman at the check-in counter how everything worked. Twenty-five dollars for an all day, unlimited play pass or forty for both Saturday and Sunday. We entered the room and took it all in for a second. The man walked in next and was awestruck and even appeared to be little overwhelmed. But during the initial assault of flickering lights and cacophony of antiquated gaming sounds, his face sprang the look as if someone he remembered so dearly was calling his name. It was almost unbelievable how he was able to differentiate the extremely specific notes, the sequence of blips and pings, zaps and zings among it all. With hope and reminiscence in his step, he searched and quickly rediscovered what had been calling for him.

I’d like to think that this particular machine triggered a special memory. Perhaps he was at a local teenage hangout playing this game when he saw the girl who would end up being his first love or maybe even his future wife. Again, I’ll never know. He smiled through his pain, appearing to be both happy and hurt from the sudden shock of nostalgia. That I could see. That I can empathize with.

Behind the man was a young boy wandering around looking for an enticing game to play. Finally he found one that was probably made 25 years before he was even born. He walked up to this ancient machine with a puzzled look as there was only one joystick and no buttons. It wasn’t too long before he figured out how to play Q*Bert and visibly enjoyed the challenge hidden in it’s simplicity. Seeing the emotions on his face as Coily the dastardly snake was hot on his heels and the victorious relief earned upon the completion of another level. The same emotions all the ghosts of the past left on this machine including myself.

Attendants of the event were of all walks of life. People from the ages of seven to seventy. Some of the adults could be found in the Atari Nintendo Lounge which was a separate, large, dimly lit room with a small bar and appropriate cocktail table games like Pac-Man and Galaga. It was a pleasant and quiet place to sit down, take a break and enjoy a beer or two. Several relaxing beanbags plopped in front of original Atari and Nintendo consoles on tubed TVs lined the walls. A few kids and more than a few adults were eventually defeated by the unforgiving and enveloping comfort of the fluffy, amorphous blob monster beanbags. Most falling asleep with controllers in hand.

As for my experience at Zapcon, I’ve always been quite partial to pinball. Watching the metal, mirror like ball warp and reflect all the lights around it, “pinball-ing” everywhere, watching it fly up ramps, through tunnels and along rails. There was an impressive collection of machines, some new and even a few from the 1950s. It wasn’t long before I heard a familiar siren. I looked and found a pinball machine I used to play as a kid called “The Getaway.” A high speed police chase themed game that would flash a spinning red light while a police siren sounded. When I hit start and the sound of an aggressive engine flowed through the speakers, I was both that man in his past and the boy attracted to simplicity. Taking me back to the first time I played this game in an arcade. Back when arcades still existed. Taking me back to the fond memories of playing this game with my father. Taken back, back to better days. 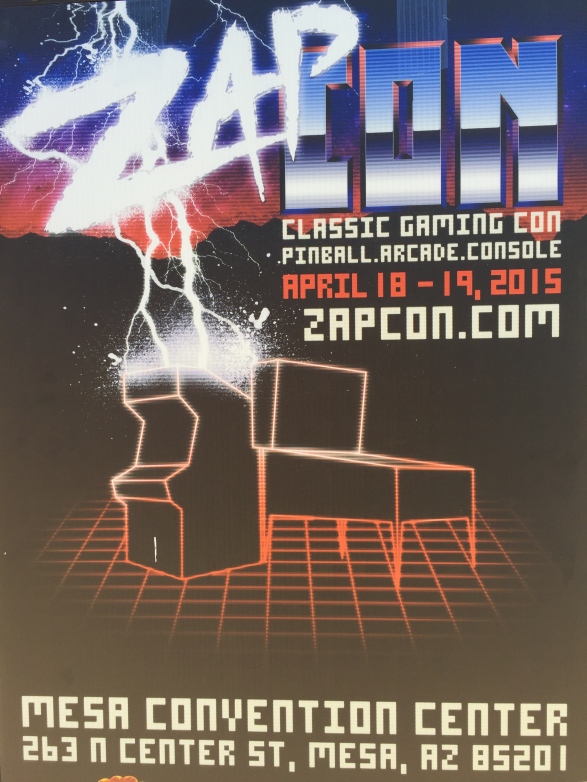 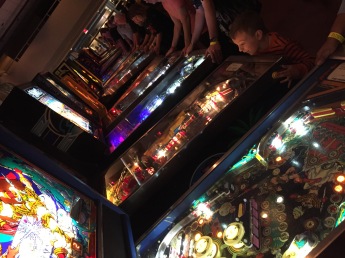 Fun for all ages. 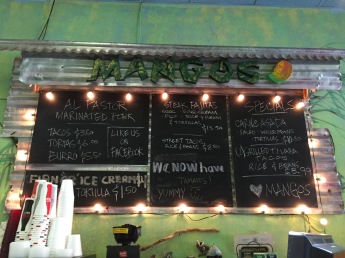 Lunch at Mangos in Central Mesa.

An Al Pastor Burro with rice and beans.

The Getaway. Back to childhood.

House of the Dead Champions.

Admiring the intricacies of the machine. 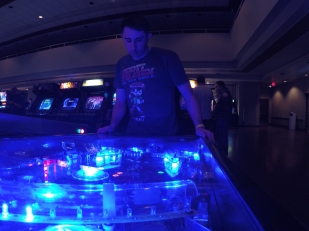 Playing in the blue lights of the machine.

Dr. Dude. A painfully hilarious embodiment of the early 90’s.